Technology has come a long way regarding automation, communication, and convenience. If you are one of the millions of Americans that are contributing to the two billion dollar wearable tech industry, then you know the value of having a piece of reliable technology to help you manage your life. 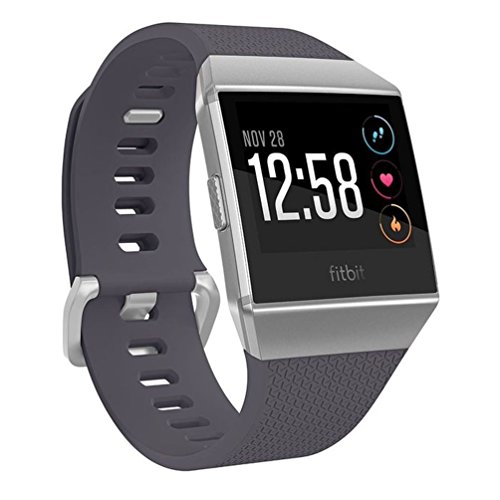 The Fitbit Ionic Smartwatch, if you’re familiar with its predecessors such as the Fitbit Flex or the Fitbit Alta, is hoping to increase how much technology can help us improve our lives.

It’s equipped with functions that are similar to those on your smartphone, while including some great features like personalized workouts, the ability to track runs, swims, rides, weight lifting workouts, and all of your activity throughout the day.

Are you falling behind on your New Year’s resolution to get fit? You won’t have to lower your expectations and resolve to star again in January if you’re interested in adding a little bit of smart technology to your outfits. You can monitor how many calories you’ve burned per day, your resting heart rate, and how many more steps you have to take per day until you can start dress shopping.

The Fitbit Ionic Smartwatch is the next step in Fitbit’s line of wearable technology. It comes with a crystal clear screen that will reflect the current time and options to check your current heart rate and step count. The Fitbit Ionic also allows you to use GPS technology from its built-in antennae to improve the quality of your long distance, outdoor workouts.

In the past, older models of the Fitbit have tracked your sleep quality, and the Fitbit Ionic will do the same. You’ll also be able to review how much sleep you got the night before using the ios or Android Fitbit apps.

The Fitbit Ionic also comes with a selection of stylish bands in large and small sizes, all of them will feel comfortable on your wrist regardless of which hand it’s on when you’re moving or sleeping.

The Fitbit Ionic Smartwatch has a few flaws, but there are a few must-have features on the smartwatch that any fitness fanatic would be crazy to pass up.

For example, how often is it that you can dive into the pool while still wearing your watch? The Fitbit Ionic is water resistant up to 50 meters. You can shower and swim while the device is attached to your wrist and you don’t have to break your flow the way that you would if you had to remember to put it back on after your shower or swim session.

However, while other fitness trackers have dipped their toes into offering workout tips or short workouts with their devices, Fitbit has taken that a step further. Fitbit provides a coaching feature that comes with three built-in workouts. You can tailor these workouts to your needs, and the movements will be shown on the Fitbit’s screen while you perform the moves from the workouts.

The Fitbit Ionic goes out of its way to handle all of your fitness needs at once, as you can also check your heart rate in the midst of any workout that you do with the Ionic’s coaching feature.

By the year 2021, it’s likely that 1 in 5 American will utilize a fitness tracker. Fitness trackers like the Fitbit Ionic Smartwatch are already ahead of the curve by offering the option to check your heart rate and sleeping patterns as well as support built-in workouts.

If you install the Fitbit app on your Android or iPhone, you can view some of the data that the Fitbit Ionic records while you wear it. You’ll be able to see how much sleep you’re getting per night, how often you’re waking up in the middle of the night, and your overall sleep quality from the app on your phone or tablet, or you can log into your Fitbit account from your computer.

The Fitbit Ionic Smartwatch also takes the pressure off in terms of remembering which route gave you the best workout on your last run or cycling session. It’s built-in GPS capabilities will remember the path that you took and be able to pinpoint your location. Fitbit promises that you’ll get accurate location results because of it’s built-in antenna and the GLONASS technology that will help it reach more satellites.

Amongst your recorded work out data, you’ll also find information on whether or not you’ve hit peak zones. The Fitbit Ionic will measure your real-time heart rate to see if you reached the Cardio, Fat Burn, or Peak zone of your workout.

Also, devices like the Fitbit Ionic Smartwatch will seem less like an optional accessory give that Fitbit has gone to extra lengths to offer features such as a four-day battery life. You’ll be far less likely to leave your Fitbit resting on the bathroom counter or bedside table if it’s become a part of your daily schedule.

The Fitbit Ionic has plenty of other cutting-edge features that will add convenience and assistance with your fitness plans.

Fitbit fans were quick to snatch up this new installment in the Fitbit Family for all of the reasons that Fitbit has become successful- step counting, calorie counting, sleep tracking, and a ton of other must-have features.

The Fitbit Ionic is considered to be a huge step forward in wearable fitness tracking technology because of it’s water resistance abilities, extended battery life, and built-in workouts.

An overwhelming majority of Fitbit customers still think that the Ionic SmartWatch is an excellent installment in the Fitbit line. The 15% of customers that gave it three stars or lower are still looking forward to seeing how Fitbit improves upon small bugs and new features in the coming months.

The Fitbit Ionic is a huge step forward for Fitbit after its acquisition of Pebble. The coaching features, extended battery life, and heart rate monitoring capabilities are going to win over lifetime fans of the Fitbit company.

If you’re looking for a device that focuses less on the fitness aspect of things and more on the perks that come with a smartwatch like texting, addressing phone notifications, and functioning as an accessory to an outfit, then the Fitbit Ionic Smartwatch might not be the right choice for you.

There will more than likely be updates available soon for any bugs in the watch’s software. In the coming months, it’s best to keep an eye on the Fitbit Ionic Smartwatch, if you haven’t bought one already.