The Fitbit One is one of the most popular wireless activity and sleep trackers currently available on the wearables market. In this Fitbit One review, we will show you the main features, functions, pros and cons of that outstanding good fitness device. Read on now to get the latest and freshest information about the Fitbit One! 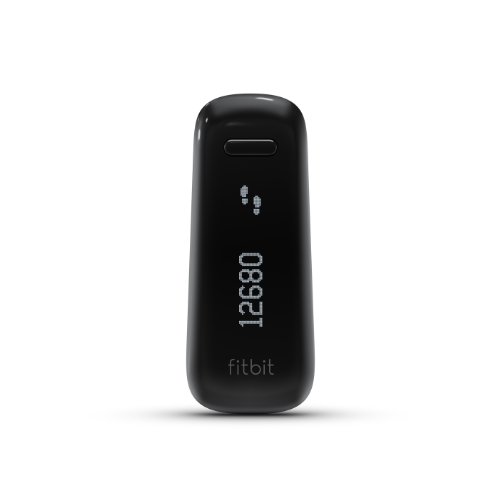 Inside the packaging you will find the Fitbit One, the Fitbit One clip, the wireless USB Bluetooth dongle for your Mac or PC, a USB charging cable and a comfortable sleep wristband.

Fitbit One – Setting up the device with 10 simple steps

Fitbit One review of usability

In contrast to the Fitbit Flex, it has a display and a single push button on its top side. When you push the button once, the screen will light up. When you press the button again you can go to the next screen item.

The Fitbit One visualizes your activity as a little flower which will grow bigger the more active you are. For this Fitbit One review I made a picture with the active step counter option which you can see on the right hand side!

Moreover you can see the distance you walked today. Of course, the fitness tracker will also show you the current time so you do not need an additional watch.

It has also an integrated stopwatch functionality. Just press the button of the Fitbit One for a longer time until the stopwatch starts to count. Do the same thing to stop the stopwatch.

Fitbit One – summary of main functions

During the day the Fitbit One will track your

Moreover, you can use the stopwatch and time functionality. The Fitbit One will sync wirelessly with your mobile and desktop computer application.

While you sleep your Fitbit One will track your

Fitbit One review of sleep tracking

How to use sleep tracking mode

If you don’t wrap it around your wrist too tight, you won’t notice it anymore during sleeping. Because the wristband in sum is very comfortable, I can sleep very well with it.

Inside your Fitbit dashboard you can take a closer look at your sleep data. You will see the time at which you went to bed, the time it took until you fell asleep and the time you were in bed.

Moreover, the sleep tracker will notice the number of times you were awake and restless. Out of this data, the so called sleep efficiency indicator is calculated. The better you sleep, the higher your sleep efficiency will be.

When I created this Fitbit One review I had a current sleep efficiency of 98% which is already pretty good I think!

In your Fitbit One sleep tracking settings you can also choose between “normal” and “sensitive”. This option is available to make the device more or less sensible to your arm movements.

To sync the Fitbit One with your smartphone or personal computer just start the Fitbit application and press the syncing button. After a successful synchronization, you can go to your Fitbit dashboard to review your data.

When you are reviewing your data at the Fitbit dashboard, you can choose different options. You can see daily, weekly or monthly statistics. The dashboard will show you also whether you have reached your fitness and weight goals or not.

With your mobile phone app you can connect with your friends, start challenges and earn badges, which will help you to stay motivated.

Although it is not recommended to go swimming with your Fitbit One, it is sweat, rain and splash proof. If you need a wearable for swimming you should take a look at this top list.

Fitbit One will sync with over 150+ devices. For the complete of compatible devices you may take a look at http://www.fitbit.com/devices.