In the eyes of many consumers, Garmin had already cornered the market in the wearable fitness device community with its Fenix line of multisport watches.

But when it came out with the 5X product, there was some concern around how large and “bulky” the product was, and whether that size would end up being too prohibitive in the minds of potential buyers, even with all of the great features the company is known for packing in its devices. 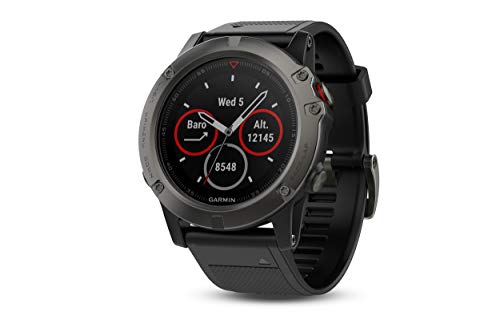 However, with just a few quick taps on your keyboard, you’ll quickly find that there are many people who tried out the device, and believe that it might just be one of the very best multisport watches and/or wearable fitness devices in the market today.

Garmin came out with its Fenix 5X line with one purpose in mind: to bridge the gap between stylish and functional wearable fitness devices, and world-class technology specifically designed with fitness and outdoor enthusiasts in mind.

The Garmin Fenix 5X Sapphire is made up of a variety of different components that meet this mission statement. The QuickFit™ bands allow users to “accessorize” the watch, based on whatever setting in which they might find themselves.

The Elevate™ wrist heart rate technology within the Fenix 5X accurately measures heart rate as well as many chest strap devices and uses this data to provide performance metrics and training status readings that show the comprehensive effects of your workout.

And the vivid main display of the watch itself offers full-color TOPO U.S. mapping for at-a-glance navigation and location reference. That way, you can track where you are, where you were yesterday, and how you can beat yesterday’s performance.

Unlike some of the competitor products in the market that offer devices with similar functionalities, you don’t feel like you’re stuck using some antiquated technology when trying to leverage mapping capabilities with your fitness device.

When you use the Fenix 5X, you won’t endure the lag between different parts of the map and the device itself. It’s as seamless as having a very small smartphone on your wrist, and easily maneuvering through one of the applications on a smartphone.

We certainly don’t mean to disqualify the “desk jockey” and the “weekend warrior” crowd from ever wanting to buy this device. That being said, the Fenix 5X seems like the perfect companion to the person who’s constantly in motion: the nature buff, the daily runner, the triathlete, the adrenaline junkie, or some combination thereof.

Because of the unique features and capabilities of the Fenix 5X, they’re going to be able to make the most out of their potential purchase.

Plain and simple: the maps are what makes the Garmin Fenix 5X Sapphire device stand out amongst all other multisport watches.

The Fenix 5X not only comes fully equipped with detailed topographical maps of the United States already built into the device, but you have the capability to add even more maps as well. Garmin’s whole points for wearers of the Fenix 5X is to not only allow the wearer to fully track where they are at any given point in time, but to also track your activity and performance on any given path you take, calibrating for the terrain you’re on as well.

The amount of knowledge and detail that Garmin’s system has for a given location is astounding; whether it’s little parts of nature or the latest brick-and-mortar location, Garmin will likely have up-to-date information about it in its system.

If you’re someone who enjoys hiking, the Fenix 5X is definitely a great device, especially if you find yourself having veered off the base trail. In fact, it’s entirely possible to use your Fenix 5X as your sole “planner” for your hike, without having to meticulously ensure you’re staying on the marked trails. You’ll rarely (if ever) have to worry about suddenly losing reception and being lost when you’re wearing this device.

You can just pull up a map, use the menu up/down button to zoom in and out of the map, and the execute button to toggle their functions to pan around the map. You can also go into the settings of the device and choose how detailed you want your maps to be – low, medium, or high – which will vary how detailed the terrain is and how many place names appear.

One particular user recalled his experience when going hiking on a steamy, 100+ degree weather day in the southwest, and how the Fenix 5X might have save him from danger. That individual used the Fenix 5X’s “Back to Start” feature — which allows you to set a start point and have the device direct you back to that origination point — and safely got back to his car.

All that information is not only fantastic for any individual who chooses to explore any new terrain, but it can also be a vital safety feature.

The other audience for which the Garmin Fenix 5X Sapphire really sets itself apart is the runners. They’re absolutely going to love the ability to upload their own routes into the watch, and then scan the on-watch map to pick a start and end location for your run.

And if that sounds like too much work, they can simply utilize the watch’s automatic route builder, without having to waste time plotting the perfect route, and want to simply start your workout without any fuss.

Once you get your workout started, the Fenix 5X has an optical heart rate sensor on the back of the device, which encompasses the same Garmin Elevate technology that’s in the other watches in the Fenix 5 series. This technology has been quite consistent in accurately measuring resting heart rate, and mostly the same during running workouts. When compared to chest strap data, the results have been very comparable.

Of course, you can get even more data of this type when you pair your watch with a compatible heart rate chest strap such as the HRM-Run, which will potentially allow you to access additional Fenix 5X metrics like vertical oscillation and ratio, ground contact time and balance, and stress score.

But on its own, every Fenix 5X device is chock full of high-tech training features that allow you to monitor your form and your performance when running. You can access readouts for “Training Status” and “Training Effect” to see the aerobic and anaerobic benefits of your workout, and even compare those results to others who share that same data.

The device’s VO2 max estimator compiles data like your running speed, beats per minute and heart rate variability, to estimate the maximum volume of oxygen you can consume per minute. On top of all of that, based on the data from your VO2 max number, there are even features such as a recovery advisor with a recovery timer, plus a race predictor that estimates your ideal finish time.

The main thing that users consistently praise the Garmin Fenix 5X Sapphire for, after giving it a “test drive” of sorts, is the quality and the quantity of data that they’re able to access.

In a world where everything is so data-driven, and in a market where a lot of wearable devices show data that lacks both depth and consistency, the Fenix 5X truly stands out. In addition, the ability for users to sync up all that data with the other applications they use on a daily basis just makes their experience using the Fenix 5X that much better.

The most obvious knock against the Fenix 5X among casual buyers is the size of the device. It’s not meant to be subtle, and it could be described as anything but that. The focus of it was more about durability versus elegance, though Garmin tried to find a happy medium of both.

That being said, the Fenix 5X was made with the mountains and the oceans in mind, as opposed to the boardroom. Yes, the Fenix 5X weighs almost twice as much as an Apple Watch. That weight difference isn’t very noticeable during day-to-day life but could be more prevalent when you’ve got that load attached to your wrist when you’re exercising.

But at the end of the day, the Fenix 5X doesn’t make any apologies for what it’s trying to be: a device that’s about providing cutting-edge geotargeting capabilities and unparalleled activity-based analytics. You can’t get that type of visual and empirical data on the smaller, lightweight wearable devices in the market out there. That’s what the Garmin Fenix 5X power-users recognize: it provides a level of detail that you’re not used to seeing from other devices, either.

Considering that this device costs nearly twice as much as many of the popular wearable devices out there, the higher price tag on the Garmin Fenix 5X Sapphire might be a tough pill to swallow initially.
Even after you buy it, it might take some getting used to, when you see the unorthodox large face of the watch atop your wrist.

But for those individuals who are avid outdoor enthusiasts, and for those people who truly enjoy being able to access and track exercise data that most other devices simply don’t allow you, this device is worth every penny you’ll spend.

The Garmin Fenix 5X is a device that you’ll get just as much out of, as you’ll initially put into it.