If you’re a runner, it’s likely that you take your choice of running shoes very seriously. A perfectly good run could be ruined by the wrong pair of sneakers, and there’s a chance that you slip into a pair of New Balance sneakers before you pound away at the pavement.

New Balance knows that their shoes are excellent for running, whether you’re going on a jog or you’re throwing your feet against the dirt of a soccer field. However, New Balance fans will be thrilled to know that sneaker company has provided the perfect tool for runners.

The New Balance RunIQ smartwatch won’t disappoint if you’re looking for a wearable that doubles as a fitness tracker and a watch.

The New Balance RunIQ smartwatch is an Android-powered watch that promises to be the ideal wearable for runners and cyclists. It is designed to operate closely with Strava, an internationally used app that can track both bicycle rides and runs.

New Balance’s first smartwatch comes with a built-in GPS so that you can track your routes and pinpoint your location, a built-in heart rate monitor, and 4 GB worth of memory. You can download music onto the New Balance RunIQ, and it’s compatible with most Bluetooth headphones, a feature that any runner or cyclist won’t be able to live without.

It’s designed to be water resistant, but it’s not built for swims. However, you can still shower while wearing the watch just like you can with most fitness trackers. It currently comes in black, and New Balance will be including more colors in the months to come.

The New Balance RunIQ will track your movement and heart rate for up to 24 hours as long as it’s being used passively as a fitness tracker. You can get about five hours out of the battery while you’re actively using the GPS to track your pace, distance, and times while you train. 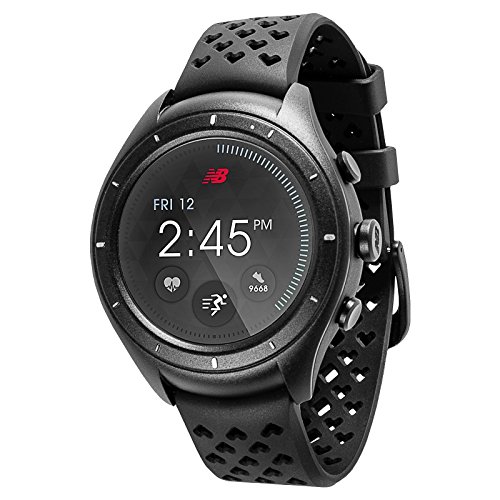 If you’re going on a long distance run or bike ride, it’s imperative that you have some upbeat, motivating tunes to listen to. The New Balance RunIQ makes sure to address that because you can download 4 GB worth of music onto the watch. You can also import your Google playlists so that you can keep the same music pulsing in your ears no matter what you’re doing.

The New Balance RunIQ watch is Android-powered, but you’ll be able to view texts regardless of whether or not you have an Apple or Android phone for it to connect to. Additionally, you’ll be able to use the find-my-phone feature with either one.

If you’re a cyclist and you’re dying to take advantage of the unique features that the watch has to offer because of its pairing with Strava, you’ll be thrilled.

You can compete with other users. You’ll be able to see if other runners that use the program in your area have run on the same route, and how far they’ve gone. Strava creates a leaderboard, and you’re a part of the unofficial competition when you use it, which is a bonus if competition will motivate you to work harder on your workout.

Like most wrist wearables, this watch is water resistant up to 50 meters, but it’s not recommended that you swim with it as it won’t be able to accurately track your workout. However, you can wear it in the shower which significantly decreases your chance of forgetting to put it back on, and missing out on all of your stats for the day.

Want to brag about that extra-long bike route you made it through without actually bragging?The New Balance RunIQ’s tracking ability is a double threat with the inclusion of Strava. Your stats will be uploaded if you’re using Strava. If competition motivates you, you can even enable it so that other runners and cyclists can see your stats and try to beat your score.

Most fitness trackers have a hub where you can view your statistics such as your heart rate, your sleeping habits, your calories burned, and your steps taken. The New Balance RunIQ takes a different approach to storing workout data for you because you can download third-party apps like Google Fit instead.

The Google Fit app, when it works with your New Balance RunIQ, will offer you detailed information about your runs, your heart rate, your weight, and any other physical health info that you’d like to keep track of.

The app will track your progress on your weight loss goals, and it will keep track of the number of steps that you’ve taken that day. You can view your progress, and you can view your data as a graph or chart. However, you’re not limited to Google Fit because the New Balance RunIQ can work with hundreds of apps that you can find in the Google Play Store.

New Balance has leapt into the world of smartwatches for the first time with the New Balance RunIQ, and customers have a lot to say about the watch.

Many users were surprised to find that New Balance was only releasing the watch in one color at the moment, and that lone color is black. Customers were excited to find out that the GPS accuracy on the watch was excellent, and that being able to link it to Strava was a must have incredibly fun bonus.

Users felt that the addition of Strava was a huge bonus because it helped them with their running and cycling routes, and they felt that it added to the watch’s promise to be a must-have purchase for runners and cyclists.

However, given that this is New Balance’s very first smartwatch and heart rate monitor, some buyers weren’t completely satisfied.

Some users were disappointed that the watch didn’t do more since it’s classified as a smartwatch and a fitness tracker. Individuals that prefer workouts outside of running and cycling wanted the watch to be able to account for a little more and felt that it was not going to be a good fit for them in the long term.

The battery life came under fire for a lot of people, as the watch only stays charged for about five hours when you’re using it in GPS mode on a run or bike ride, which is unfortunate since that might be one of your main reasons for purchasing the watch. The battery stays charged for about twenty-four hours if it’s only being used as a fitness tracker and heart rate monitor.

Additionally, some users were frustrated that they couldn’t respond to a text or notification if they did not have an Android device, although the device works with both Apple and Android products. You cannot pair the watch with a Windows phone, and the overall lack of personalization left some users wanting more.

However, there was a consensus that for the first fitness watch in New Balance’s line, it’s moving in the right direction. New Balance customers felt that the watch delivered, especially since you can purchase it for a lot less than you would if you bought a watch from one New Balance’s competitors.

Is a morning run or evening bike ride an integral part of your day? If you cannot live without running and cycling and you’re ready to take your workouts to the next level, you’ll love all that the New Balance RunIQ has to offer. Also, if you’re particularly competitive, the watch’s integration with Strava will pique your interest.

If you’ve never been much of a serious runner and you’ve drifted towards workouts like vinyasa yoga, boxing, HIIT, or swimming (you can’t swim while wearing the New Balance RunIQ. In the past, this may not be the best fit for you. You might fare better with a standard fitness tracker, but you’ll benefit from the heart rate monitor, Bluetooth pairing capability, and activity tracking mode.

This smartwatch is a strong fit for die-hard runners and cyclists. The New Balance RunIQ’s integration with Strava is a big part of this can’t miss package, and you’ll want to familiarize yourself with it as New Balance improves their first smartwatch going forward.

If you’d like to try a smartwatch and fitness tracker combo and you prefer running or cycling, then the New Balance RunIQ is a great way to go.